The Shaman, My Fire, My Stalkers & Me

Recap for old & new readers:  Last June, I turned this blog over to documenting my partner’s transition from male to female, hopefully to give trans-SOFFAs* a voice.  During the autumn, chest pain and fatigue made me increasingly ill until I lost the creative energy to write.  (See Bounty Hunter Awaits)  In March, I got a treatable diagnosis that requires a lengthy convalescence.  This medical condition had no causal explanation connected with my medical history or current lifestyle.

So I went to the shaman. 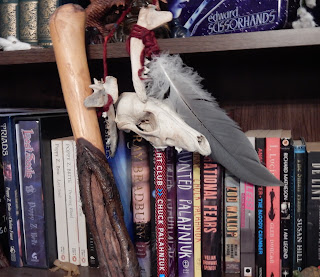 While the doctors did their thing, I wanted to pull my psychological issues into my healing.  Most people would go to a mental health specialist, but after 30 years as a trauma therapist myself, I make a really shit client.  And as Bitler says, shamanism turns psychological theory into a tangible narrative, which means I can’t hide behind my cognitive egotism.


But mostly this experience demonstrates the healing power of the personal story.

After taking my history, the shaman felt I’d traded my creative energy to protect my family during a time when we were stalked and harassed by a group I call the Flying Monkeys (FMs).  As you know, engaging with genus FM draws you into uncharted delusion; your most innocuous act or remark take on complex and evil meaning.  Bitler’s skill at not being drawn in by the FMs scared me.  I felt she under estimated their intent and left me to protect us.  Which I, an inveterate communicator, had to do by keeping my feckin mouth shut.

The shaman had me lay down on a heated massage table, relax and do nothing.  She sat beside me and went on her journey.

The shaman’s guide told her to pack an invisibility cloak, then follow her to the Middle World where a Dark Entity held my Fire (creative energy) hostage.

They rescued my Fire under guise of the invisibility cloak and brought it to the Upper World where the rest of my Spiritual Self waited in a pine grove with Elders.  Bitler’s Spiritual Self came in and we exchanged gifts that rectified our interpersonal conflict about dealing with the FMs.

The Elders wanted to bring in the FMs but my Fire was frightened of them, so my Power Animal came to protect us.  The FMs were escorted in, returned a waterfall (my vested emotion) that they’d stolen from me, and I was revitalised.  They were escorted out with a wooden object of mine.  The shaman wasn’t sure I’d given it willingly – they may’ve stolen it to maintain the connection.

The lies left holes in me that the Earth Elemental filled with burning wood to melt any residual ice.  They packed the rest of me with black tourmaline except my chest which they filled with carnelian crystals.  My parts were bound together with plants and vines, then washed and anointed.  They repeated the process with my Fire.

My Fire and my Spiritual Self were then led into a fire where we slowly burned to ash.  The shaman’s guide mixed the ash with water and clay which she used to reform me.  The guide wrapped me in a garland of fire lilies and I reanimated.  My power animal took me on a walk to be fed and nourished.

The shaman could see us on this respite walk but was also at my home with her guide to smudge the rooms with sage and protect all the windows with holly.

A bit crazy?  Reframing, actually.  Much like a therapist helping a client release her sense of responsibility for being abused – if dinner were on time, he wouldn’t hit me.

There’s no fire or water or holly, and certainly no invisibility cloak here with me as I write.  They’re images layered with conceptual metaphors that reframe my perception of what I’ve been through.  When I think of my energy, power and creativity as fire, I see it as something that needs tended rather than an inexhaustible flame.   The physical symptoms that come with my illness are so closely aligned with fire and heat sensations, they remind me to stop playing the Little Red Hen who does everything by herself because no one will help her.

My self-neglect gets shored up with fiercely protective holly, the FMs kept away by an invisibility cloak.  Bitler’s policy of not-engaging with their havoc isn’t head-in-the-sand denial; rather, it’s water, a constant flow around objects, malleable yet unstoppable, energetic and free.

A nice story, indeed.  One that puts parameters round what was a thoroughly out of control and unpredictable situation. It gives me the tools (metaphors) to contemplate my illness, my relationship, my identity as someone who was stalked and harassed.

My shaman told me the FMs weren’t done with us, surprise surprise.  Sure enough, a week or so later, news of their latest campaign trickled in.  (People let you know it’s still going on without you.  They’re good like that.)

In this instance, the FMs’ method was as hilarious as it was nuts.  They disparagingly ‘outed’ Bitler to everyone, 9 months after she’d started her Real Life Test.  I mean, as my son El Punko put it, a transition isn’t an inconspicuous tummy tuck that people may wonder about – did she or didn’t she?  The FMs’ chosen listeners included people who work in Bitler’s medical specialty but’ve never met her.  Like, if you were a bus driver in Stirling, you’d be interested in a bus driver who transitioned in Wales.

I figured here was a chance to regain my fire by doing what I do best – communicate.   So I lifted the invisibility cloak and sent a mischievous wee missive to the FMs, pretending their latest campaign had no malice aforethought.

I hear you’re spreading the news about Siobhán’s transition, and I’m here to help.

Treating it like a press release (Spoiler alert – you learn Bitler’s real name).

Suggested they read this blog for more intimate details, and attached a dead good photo of Siobhán.

So knock yourself out, spreading the news.  The more people who know what a trans woman can do, the more trans folk who’ll be inspired to lead amazing lives.

Gave them our blessing and belled the cat.  In Flying Monkey form, that is.

I felt grounded.  Not spiteful.  Not helpless.  Not under attack or on the offensive.  There they were, the FMs, living their story, and here I was, fully visible and living mine.

When I started work on this blog entry, I remembered when one of the FMs forced her way into our house.  Siobhán’d been all waterly about this invasion (i.e. politely asked the FM to leave).  The memory infuriated me and vwooosh! I was consumed with rage, imagining violence, feeling impotent against them, let down by Siobhán.

Then I noticed that my chest muscles sizzled.  Well, shit.  For the sake of being my smartass self, I’d undone all the shaman’s work.  What an eejit.

The power of story.

I reread the shaman’s healing journey, taking time to visualise each part of her trip with all of their metaphoric actions and nature symbols.  My rage did a sudden switch, a sort of fireworks explosion of mirth through my body.

Powerfully instructive.  My fire isn’t one that consumes and destroys.  It cackles and dances like my gleeful Doodle dog.  It counts coup with your soft spots, rides away laughing.  But never destroys someone for revenge.  Never seeks violence.  And isn’t impotent or betrayed.  Mirth and joy and creativity are the only ways I should use my fire. 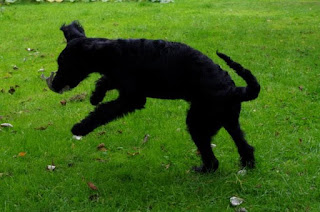 And that, my dear, is something worth dancing about.