Gender: Like God and the square root of minus one? 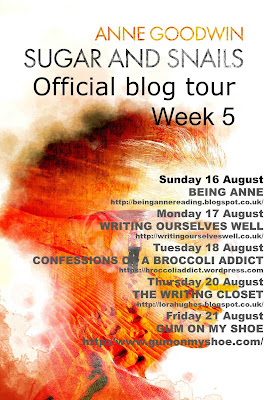 (This week, we're part of a blog tour for Anne Goodwin's debut novel, Sugar and Snails [Inspired Quill].  Check out her other stops, listed to the left.)


One of the many challenges of learning to write is in inhabiting the mind of another person, especially writing from the perspective of the opposite gender. I’ve been writing seriously for about twelve years, but still recall how anxious this used to make me. How could I – how dare I – channel the male perspective? Would readers perceive my attempts as inadequate, as fraudulent, even? Would critics strip me of my metaphorical clothes to expose the woman underneath?

Well, somehow, I managed. Yet even when I published a short story written from the male point of view, the question of gender didn’t go away. Now, when a new character took shape in my mind, I had to ask myself what was it that made this one female and that one male? I couldn’t come up with a satisfactory answer.

Now, I don’t know whether it was due to my admiration of my older brother, an early recognition of where the power lay or merely wanting to be what I was not, but it seemed to be a phase that passed. And yet I don’t think it was resolved by a particularly strong identification with the concept of “girl” or “woman”. How could it be, when I barely understand what those terms mean?

The more I explored the concept of gender, the more slippery it seemed to be. The small biological differences between male and female newborns don’t seem sufficient to account for this tendency to split humanity into two halves. The stereotype of “woman” as someone with long hair and lipstick who likes to go shopping makes me laugh. Yet if that stereotype were imposed on me, I’d probably end up slashing my wrists.

In 1995, I renewed my passport, in readiness for a three-month trip abroad. This being my first European Community passport, the layout was different to before. But it wasn’t until I was standing in line at some dusty South American border crossing that I realised there was an error in the demographic details at the back: under sex was printed the letter M for male. Despite the document having got me safely through several borders already, I was anxious. What if the immigration officers queried my identity? What if they wouldn’t let me through?
Of course, no-one batted an eyelid and, although I always meant to do something about the anomaly, I kept that passport for its full ten years. Whenever I remembered I ought to get it altered, it was always too close in time to another departure abroad. So I crossed my fingers and carried on.

My experience suggests that, while officialdom demands that people be identified as either male or female, it often doesn’t always matter which you choose. But my mild anxiety of being “outed” alerted me to the way in which daily life is unnecessarily complicated for people whose official gender contradicts the gender they perceive themselves to be. Not only on a passport they might use a couple of times a year, but on their driving licence, health service records and job application forms. If the essence of maleness and femaleness is contested, why insist on classifying people by a binary concept that can be, for some people, a source of pain?

This was one of the themes I wanted to explore in my debut novel, Sugar and Snails. But, while I’ve definitely learnt a lot in the process, I still don’t know for sure what makes me identify as a woman and my husband as a man. My attitude is articulated towards the end of the novel by Venus, my main character’s best friend:
I always thought gender studies was a load of nothing, like doing research on The Very Hungry Caterpillar or The Gruffalo … Of course it’s humongously complex … In fact it’s such a fuzzy concept, so hard to pin down, it ought not to matter a jot. But it does. Tremendously. Like God and the square root of minus one. (Sugar and Snails, p318)
(I’m assuming God requires no explanation but, for those who aren’t mathematicians, the square root of minus one is a hypothetical construct that vastly extends the number system and is fundamental to many developments in geometry, physics and engineering.)

About a year ago, I received a form from some organisation collecting basic demographic data on its members. There were the usual age and ethnic groupings but, when it came to gender, there was a third option alongside male and female. I was delighted to be able to tick “prefer not to say”, my very small act of solidarity with those for whom the two-category split is overly simplistic. 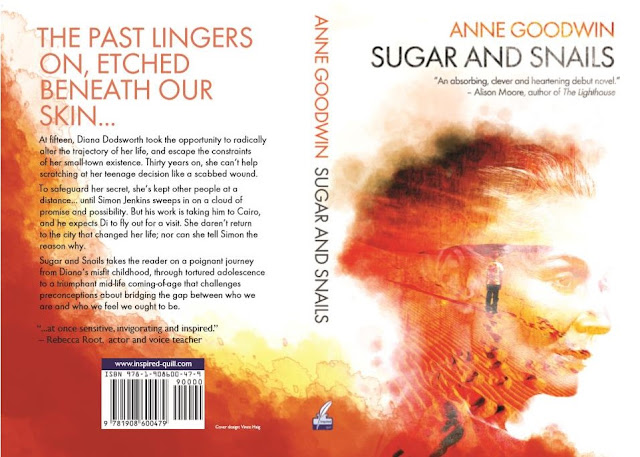 Anne Goodwin writes fiction, short and long, and blogs about reading and writing, with a peppering of psychology. Her debut novel, Sugar and Snails, was published last month by Inspired Quill. Catch up on her website: annethology or on Twitter @Annecdotist.

Sugar and Snails on the Inspired Quill website
http://www.inspired-quill.com/books/sugar-and-snails/