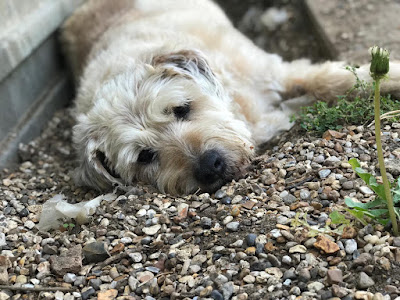 This week's high temps had Mr BigNose languishing, but allowed no rest for the gardener, be she wicked or otherwise.  Early morning waterings, raising of sails, shifting of pots to ever moving patches of shade . . .

When we hit 35C, the plants in the not-so-shady border began putting their affairs in order, despite their sail.  So began the Great Dig 'Em Up Exodus to the front garden.  Miraculously, they seem delighted with their new home.

All these emergency measures didn't stop the usual business of the garden, however.

Having the alspice go a second round, especially in this heat, gave me a bit of a surprise . . . 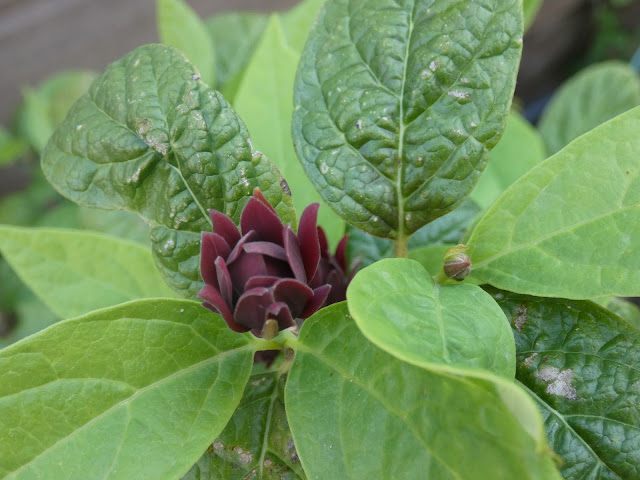 . . . while the hellebore resurrection came as an absolute shock. 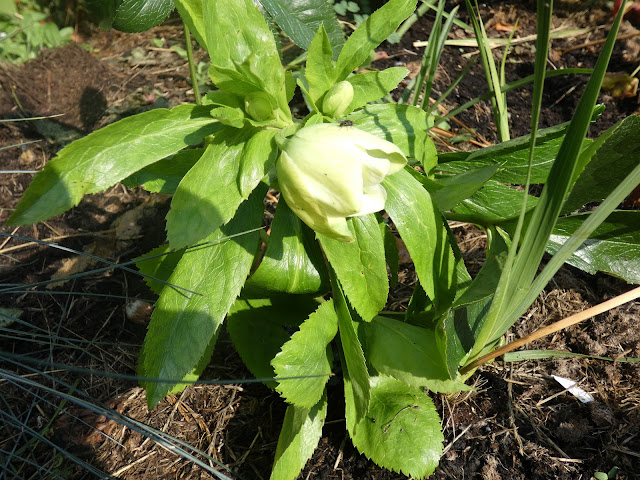 These both bloomed in their original colours, but the witch hazel, which has always been burnt orange . . . 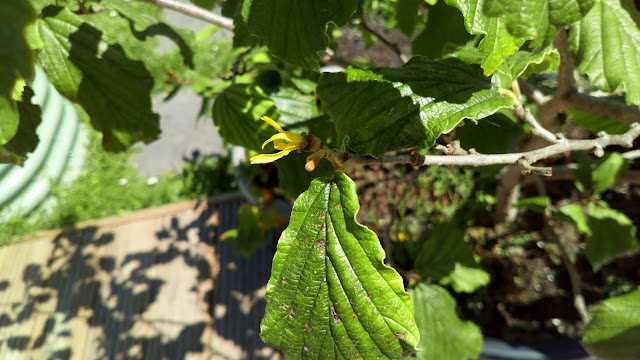 Did you ever see anything so fascinating as castor flowers? 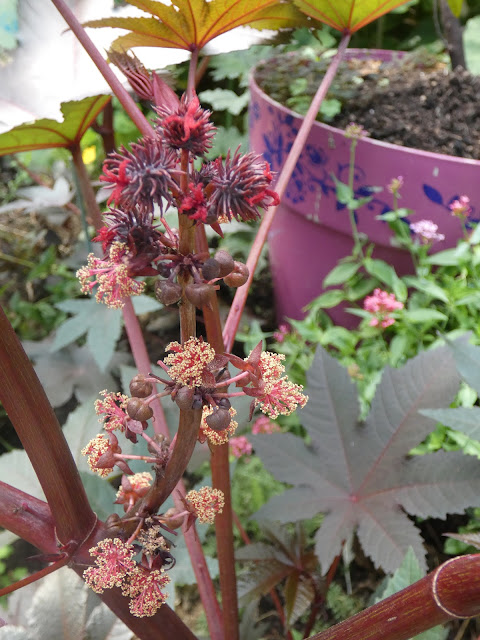 Like the lungs of some alien species, so beautiful yet gruesome at the same time.

About a month ago, an acanthus plant arrived looking like this: 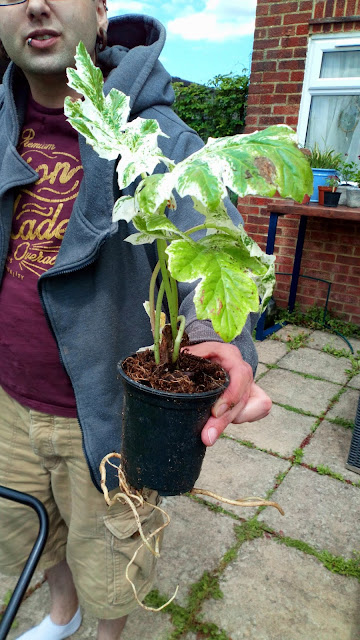 Amazingly, it only lost one of its spotty leaves & now has new growth. 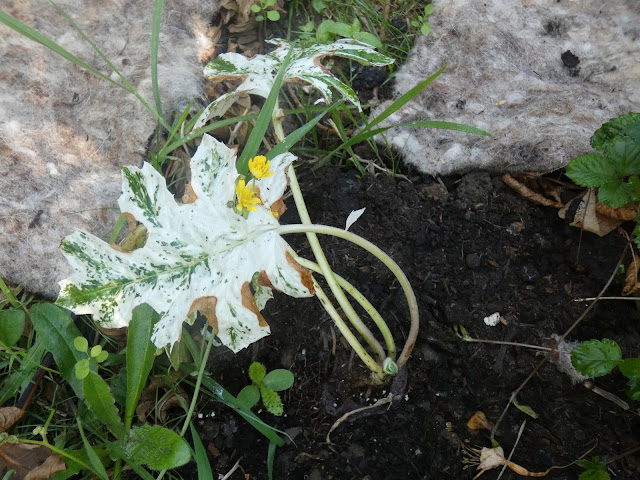 The same nursery sent an ornamental comfrey covered with mildew, which I treated. 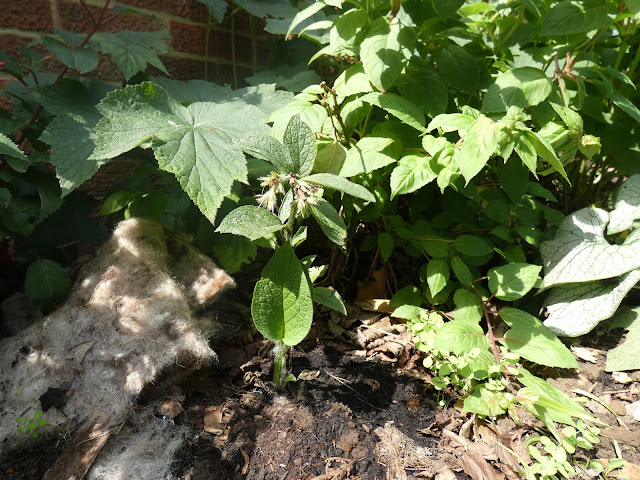 It bloomed while it was still sick, but since treatment, has a lovely & large new leaf growing in the front.  (That's one of the relocated brunnera photo bombing at the right.)

The angelica must be very delicious indeed.  Various anti-S&S measures that work for other things in the garden, don't work in this instance - combos of wool pellets, organic pellets, dead bramble & rose sticks, nightly covering with bottles or jars plus vigilantly conducted S&S patrols. 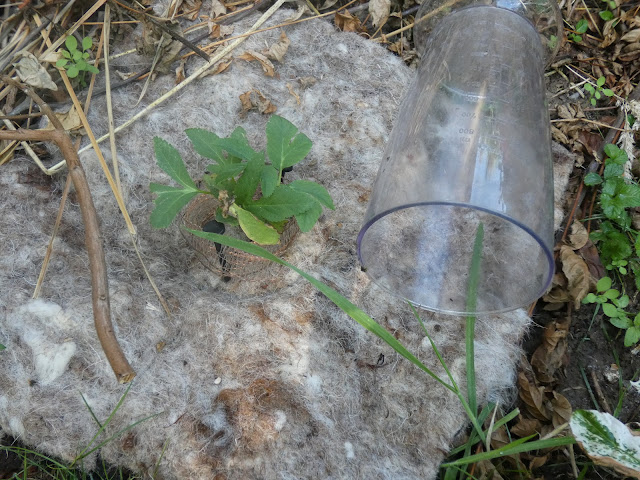 My last ditch - & fortuitously successful - combination is a fleece skirt, a copper ring & a nightly cover.  I'm not sure why this works, as I've plucked slugs off the wool pellets.  It may simply be the wool skirt & copper ring hold the covers in place better.

The jury is still out as to whether or not angelicas are worth it.

My brain's got no memory why I ordered these.  They may've featured in an SoS garden, or shown up in a sale or waved at me from inside a winter catalogue while I was wishing for spring.  The bulbs arrived when I was up to my eyes making new beds, so I stuck them into a planter w/some other strays, & hoped for the best. 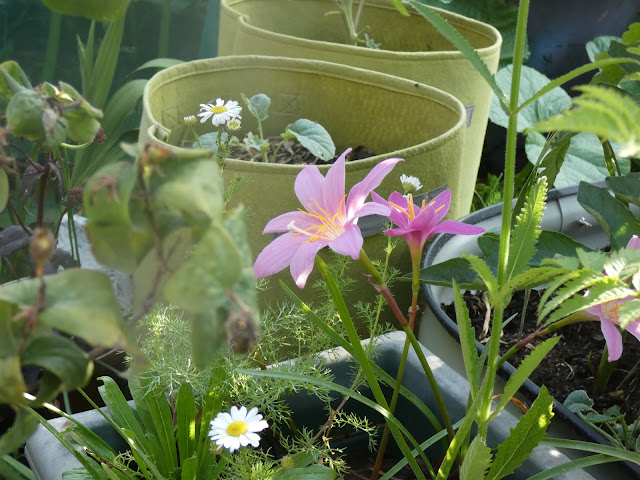 The best is that they are gorgeous.  Here's a close up to see all those delicate inside bits. 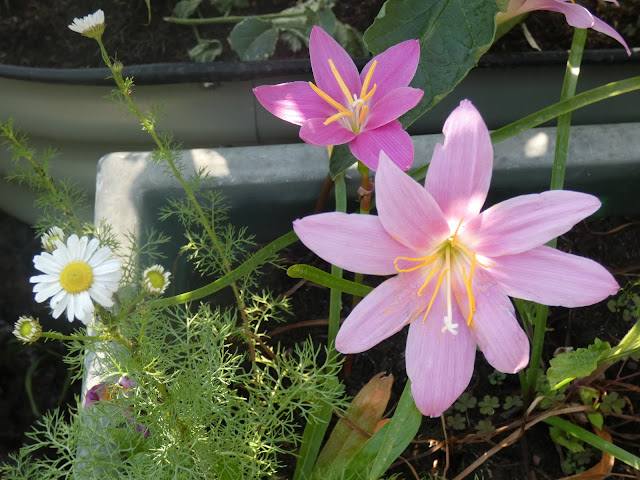 I have photos of these blooming 5-6 weeks ago, so you get your money's worth with them.  Let's hope they multiply. 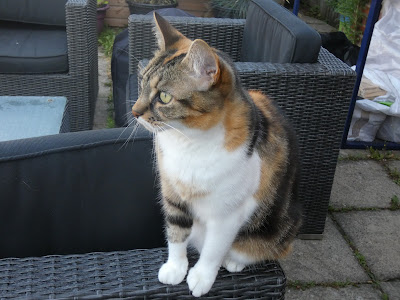 And that's my #SixOnSaturday for this week.  If you'd like to read other Sixes or better yet, want to join in yourself, drop by The Propagator who hosts us in his comment sections.

Thanks for stopping by.  See you next time.