Six on Saturday is a weekly diary hosted by The Propagator & contributed to by gardeners all over the world.  For links to other SoS blogs, check out Mr P's Comments & the Twitter hashtag, #SixOnSaturday. 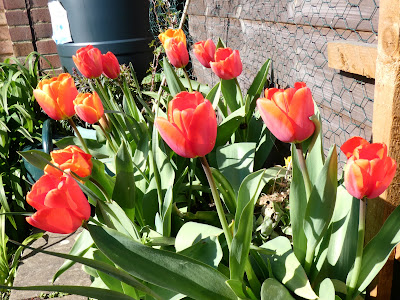 We're all still healthy & waiting for the wildlife to take over our neighbourhood.

In addition to enjoying the reek of fox musk each morning, we heard an owl the other night, a first since we've moved here.

Unfortunately, no sightings of goats or deer or wild boar.  A few bolshie cats, but of the domestic kind.

However, there have been other delights in the garden this week. 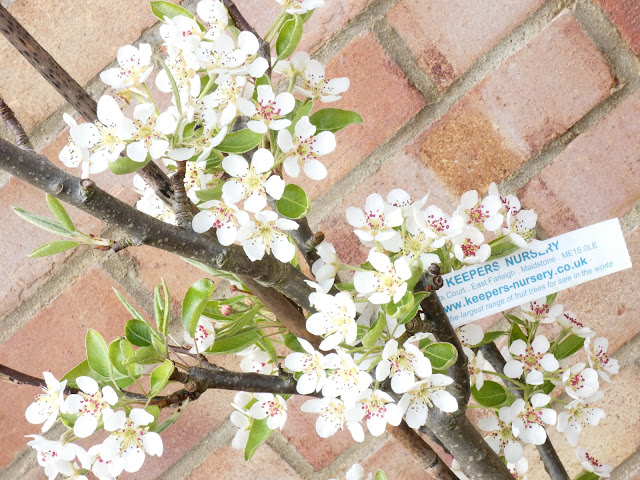 His pollination mate, Invincible, is just in leaf bud. 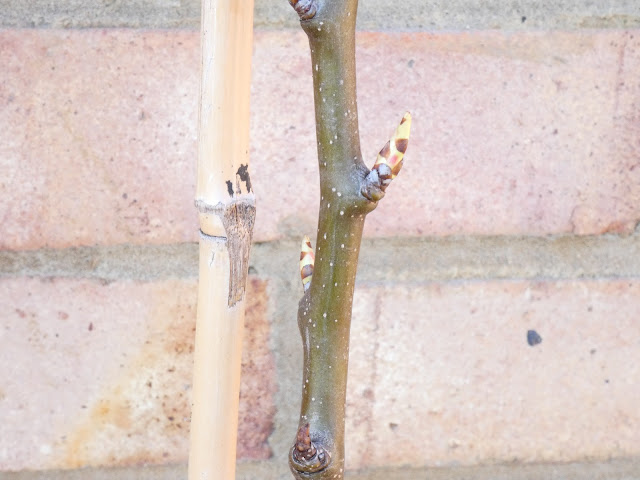 Last year, Louis managed 3 pears on his own, so hopefully we'll see fruit without help from Invincible.

As to Invincible himself, I assumed one of his 2 bloom flushes would coincide with Louis for pollination purposes.  Since Invincible was bare root a short 6 months ago, perhaps that's behind his lack of flowers.

Supporting this theory are the appletinis who came to us 2 winters ago.  They spent last year healthy enough but produced no flowers.  At the moment, they're both covered in buds. 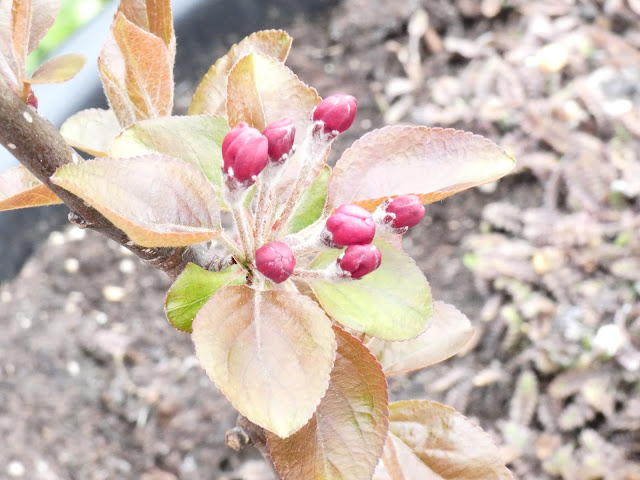 Flowers've even opened on one of them at a place where the sun first hits it.  O, my heart. 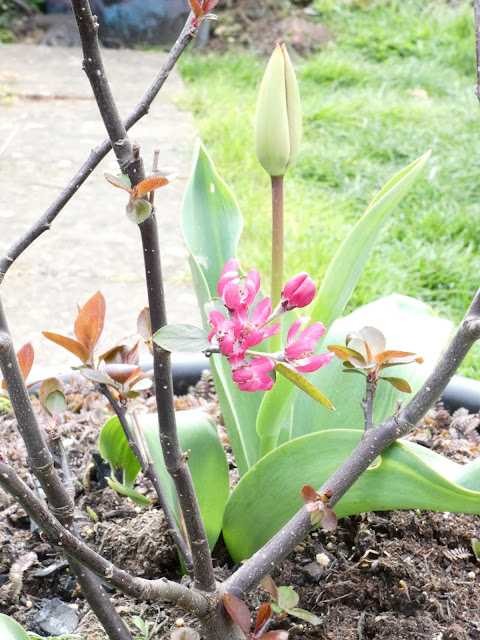 The bronze foliage should turn green as summer progresses.

Some time ago, I got 3 Thorncroft lucky dip clematis - clematis that'd lost their labels so were reduced in price.  Two of the three were in bud & one of those has begun to open. 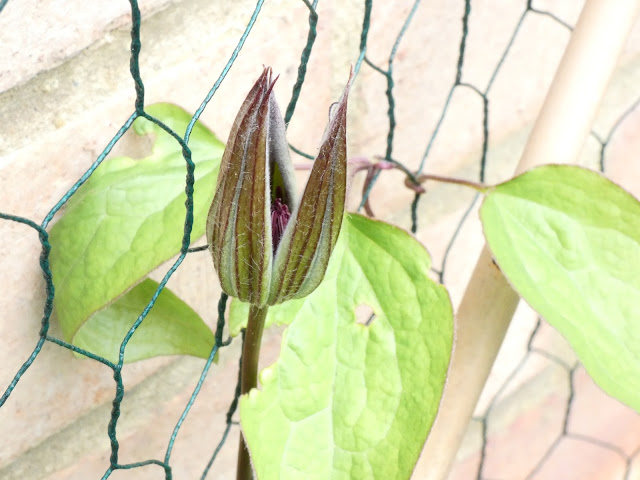 Thorncroft suggested this might be early bloomer c. Tae.  You can see a tiny bit of pink inside, so they could be right!  Quite beautiful at the moment, whoever she is.

For reasons known only to herself, Mlle DoodleFace has changed her entry point into the Doodle pool.  Her new route takes her over the only Queen of the Prairie patch in the garden. 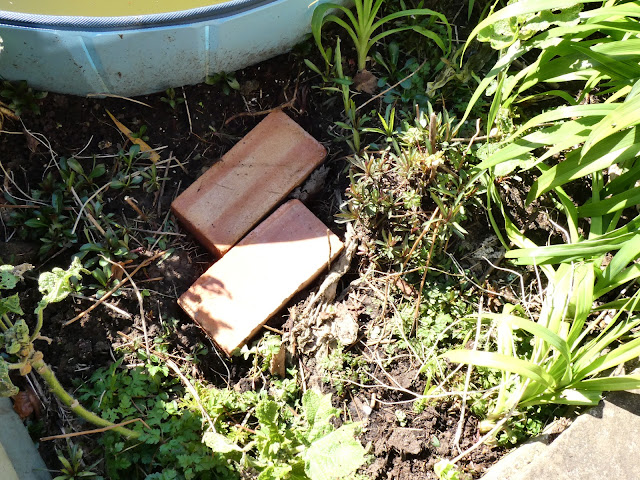 I replaced the Queen with bricks - they had to go in at an angle, due to the aster roots on either side.  The plan is that the mass of day lilies on the right & some bamboo sticks soon to be on the left will keep Doodle paws on bricks.

I moved the flattened Queen to a small meadow area near the compost bin where no Doodle ever strays. 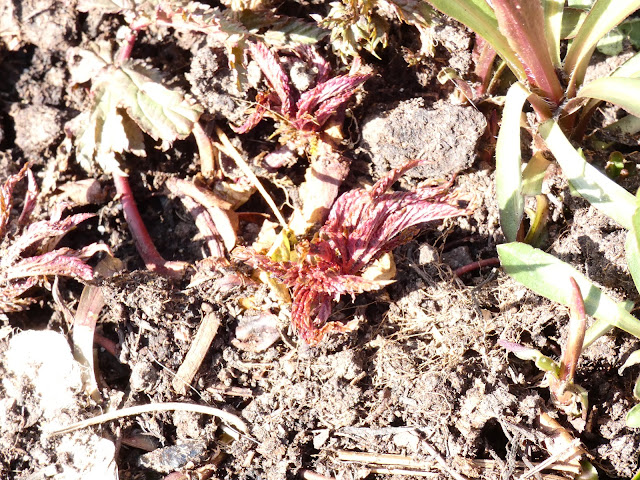 Two days later, she looked almost normal again, except for the bit at 11:00.

I was chuffed at being able to get those boxes into their brackets.  Delighted to find the missing thalia growing in them.  And now . . . 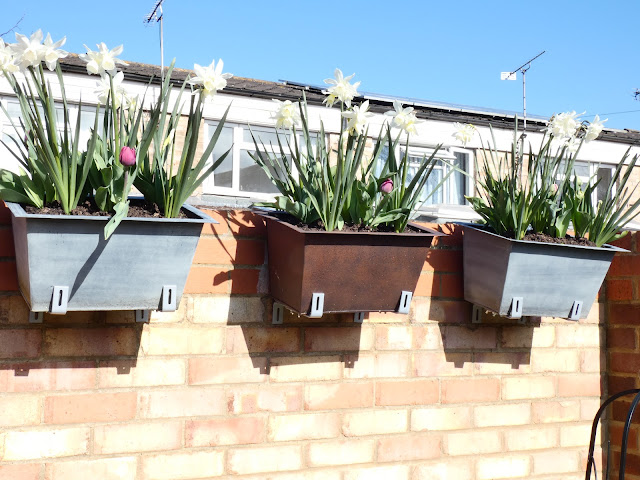 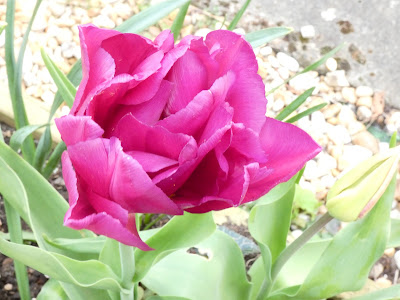 So there they are, 5 garden delights & one Doodle remedy.

Thanks for stopping by.  I hope you're all healthy & coping.  Cake helps.  Drink, too, I suppose.  Our neighbours smoke a lot of dope, & I've begin to wonder if we aren't high all the time, as well.