Six on Saturday is a weekly diary hosted by The Propagator & contributed to by gardeners all over the world.  For links to other SoS blogs, check out Mr P's comments & the Twitter hashtag, #SixOnSaturday. 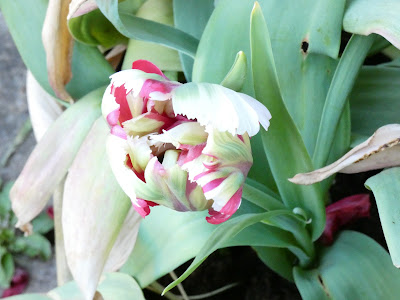 It's been a week of good things in the garden, including a propagation boom.

The tulips keep flowering like mad.  A carer brings clients on their daily walk to see the ones in our front garden.  I clutch my rosary & throw holy water at them from the upstairs window.  Thanks to me, we're all still healthy.

There's been some other good tidings in the garden as well.

This fig tree has always been cantankerous.  It grew crooked, produced scant foliage & seemed disinterested in the delicacies fed to it.  It'd always given wonderful figs though, until the last 2 years when it didn't even do that.

It occupies a lovely large pot that other more appreciative trees would enjoy, but I don't throw any plant out until it's beyond dead & taken over by woodlice.  So it was safe. 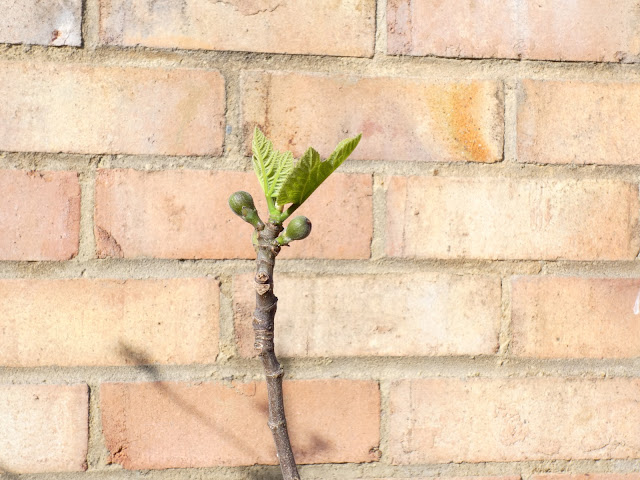 Putting up with its snit has paid off.

It's possible the fig's troubles are caused by a fabric liner in its pot that's woven with copper, supposedly to stimulate root growth.  I tried these liners in several pots, & none of the plants did very well.  I got rid of the liners except for the fig's, as it's a beast to repot.  I may bite the bullet next year & get the liner out of there.

Surprisingly, we had another romanesco harvest this week, from a few straggler plants that last time I reported, hadn't produced anything.  The heads were smaller, but just as healthy as the earlier ones. 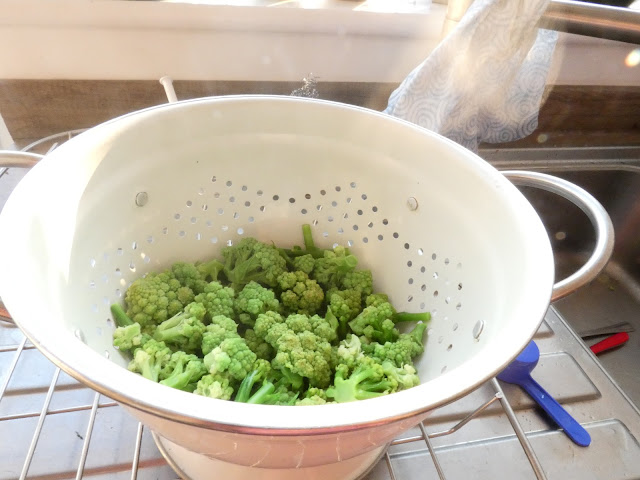 These were planted mid-summer last year, &'ve given us veg all winter.  We'll not be planting any this year, as there's plenty still in the freezer.

Well worth trying as a winter crop.

Some of you were surprised when I moaned about a free gift of 8 lavender plants.  The problem for me is that at this stage of the game, I have very little upper body strength.  Wherever they went would require digging - a project that would easily take a week or more for me.  A lot of work for 8 plants at a time when there's tons to do in the garden.

Then I happened upon a Twitter convo where Charles Dowding said even grass didn't need to be dug up.  I remembered that every bed in my garden was lawn only a year & several layers of cardboard ago.

So here's the lavender site before I started (with one last Romanesco amongst the garlic in the closest bed). 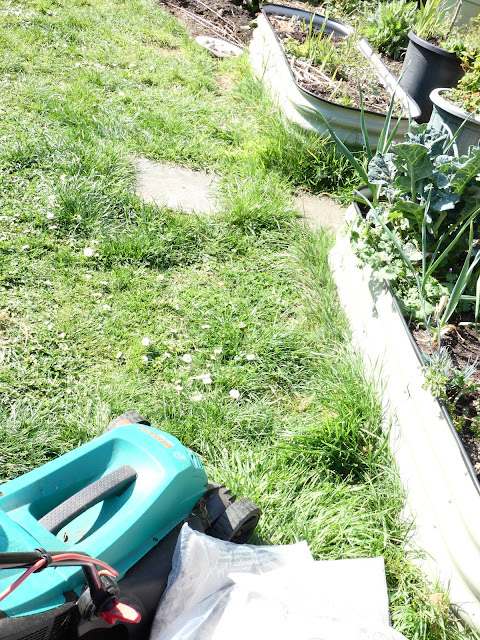 I mowed on the lowest setting in front of both raised beds, leaving the yarrow, as I like how it looked last year in front of the containers.  This done in full knowledge the yarrow may get unruly, after which I may decide I'm an idiot.

Next, 8 little holes made with the edging tool. 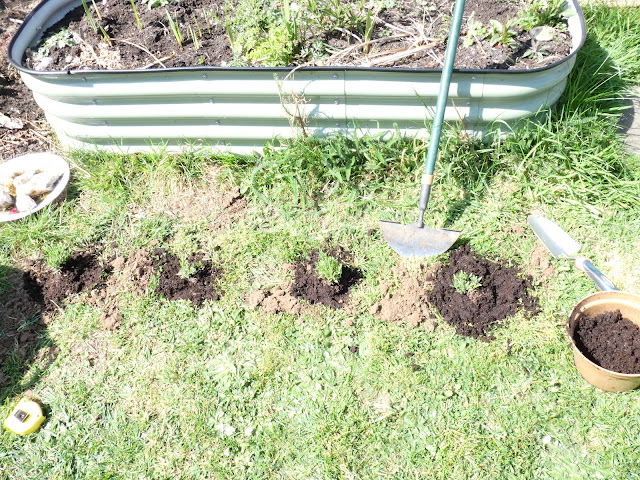 A coupla layers of fleece sheets from our weekly food box . . . 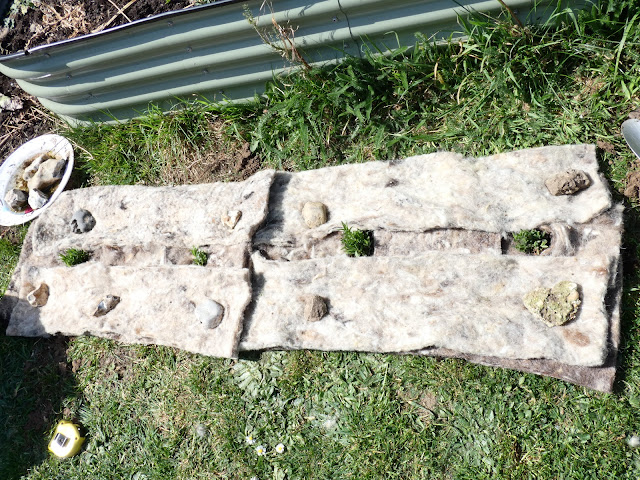 . . . which was then covered with home made compost.  They'll be slightly ugly for this summer but, based on how the other beds've developed, will look as if they've always been here by next year.

Last week's lucky dip clematis had been accurately predicted by Thorncroft to be c. Tae.  This week's was meant to be c. Carnaby.  I do believe that educated guess is also correct. 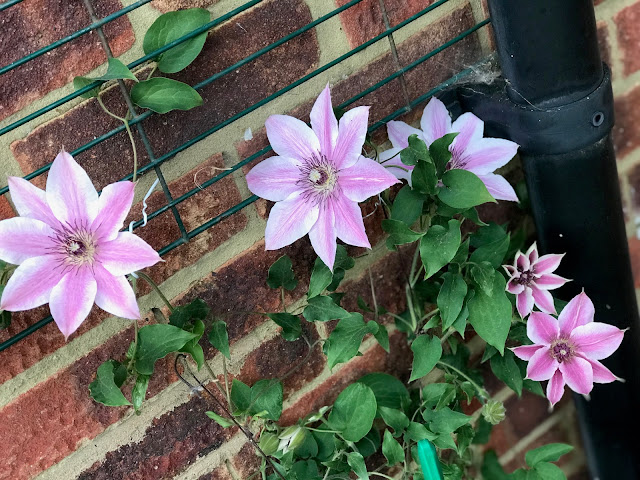 It's not as spectacular as c. Tae, but still very pretty & best of all, covered in buds & blooms.  They start out dark, like the ones on the right, then gradually become more white stripped as they open.  The first one to open is 2nd from the left.

My shrub planter flooded during the winter, & I was pleased when a few of the bulbs survived. 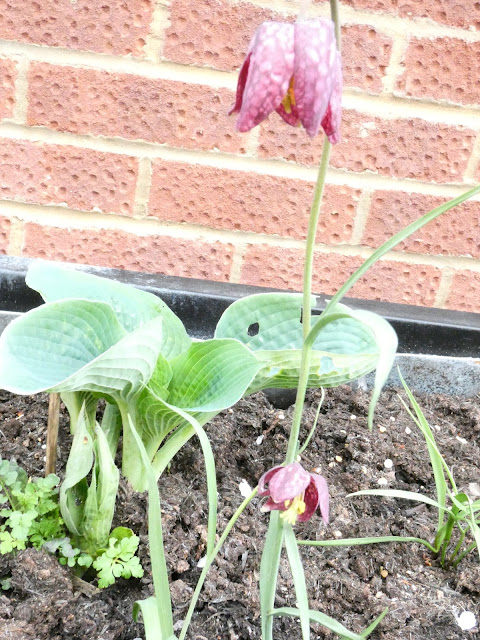 I'd expected a slithering of snake heads, but half a dozen motley survivors will do.

The bed that's only a few yards from the shrub planter doesn't seem to've minded the wet winter.  I've got 2 large groupings of these things.  From their head shape, I guess them to allium.  From their location, a type able to grow in partial shade. 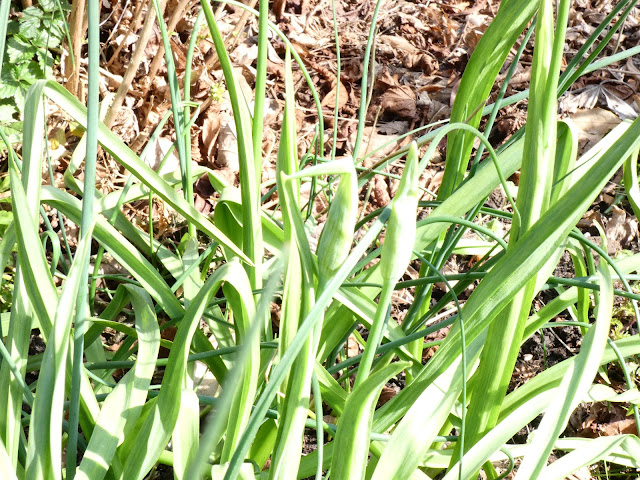 I remember buying such an allium, but don't remember what they look like.  The answer lies in my receipt box, but I'd rather not spoil the surprise.  Possibly, we'll see them next week. 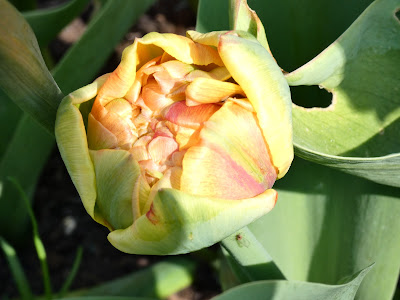 And that's a few of the happy events in my garden for this week.

So glad you stopped by.