The Trouble With Compromise

It doesn’t take a genius to realise this has been the year of the Great Compromise for me.  But it took a Doodle to make me consider what I was doing.

The plan, light a bonfire and supervise it while partaking in some nearby pruning.  When the Doodle grabbed a burning stick and raced across the garden, my multi-tasking idea went straight to hell.

I got a canvas chair and sat by the fire.  No great chore because October’s probably my favourite season, the beginning and end of the year.  The expectations of spring, the hard work and giddy results of summer are over.  All that’s left is to clear away success and failure, get ready to hunker down for the long dark hours of Winter’s death and gestation.  Maybe do a bit of reflection.

Which brought me to the Great Compromise.  Not that I’m one of the shocking holy martyrs, mind you.  When the Bit-ler’s friends ask about my reaction to her transition (Lora didn’t sign up to be a lesbian, sure she didn’t), she’s lying when she tells them she couldn’t do it without me.  (Did you never feckin think that maybe I didn’t want to go through another goddam transition????)

Sometimes another person’s dream is so big and so hard, there’s no room for you.  It’s what any Great Compromise is about.  If you need the last slice of cheesecake more than I do, you can have it.  But how do I know when you need it more than myself?

While in Dublin trying (and failing) to sort out her mother’s care arrangements, the Bit-ler was invited home for dinner by an old school chum.  She offered to come as male, as if somehow this were a kindness to the family.  Old Chum accepted, so the Bit-ler pulled back her hair extensions, ditched the bra and went a la man-boobs.

No explanation of her U2 Roadie hairstyle was given to the adult children, but another school friend was there.  After the kids scattered, he asked the Bit-ler if she were transitioning, got confirmation, then asked the usual question about what junk she still had in her trousers and that was about it.  No big deal.  Except that the Bit-ler’d been left sick in herself, relapsing into that male façade.

So really, what was the reason for the compromise?

That’s the difficulty with compromise, knowing where you end and I begin.  Should I do something simply because I have the strength to do it?  Should you accept my offer simply because I’ve made it?  Or should we both take responsibility for what’s happening here and decide jointly what’s fair to us both?

To be honest, I don’t know many people who do that, which is more a statement about myself than about most people.  During this year of the Great Compromise, it’s been the friends who were closest to me, who didn’t understand what I needed.  I suspect that’s because I don’t know how to not compromise.  And people like that.

So that’s my resolution for this coming year.  To figure out where you end and I begin.  To not do things simply because I’m strong enough.  To figure out what my Great Want for myself is.  Probably something to do with cheesecake.

Four months into the Bit-ler’s Real Life Test, she has to go sort out her mother. 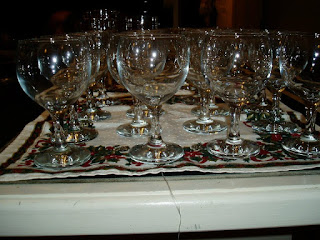 Raise your hands, all you who had an involuntary shudder at that sentence.  I'd need a pint of damson gin myself, with a baby sham chaser.  Fortunately, I didn’t have to go.

The last time these two women were together, one presented herself as male and told her mother she planned to transition.  That’s when her Disinterested Mother confessed she’d always thought the Bit-ler’d been switched at birth with some queer folks’ chillen, then followed up the visit with phone calls about whether or not the Bit-ler should absent herself from Disinterested Mother’s funeral, or the funeral itself be moved to some other city, possibly some other country so no one would know about the transition.

With this sympatica between them, the Bit-ler trots off to Dublin to pry her mother out of a geriatric ward against her will and settle her into a nursing home.  The Bit-ler’s hair extensions mean she presents as female but travels with a male passport, hair pulled back, inciting a curious look or two from Border Control.

Her mother’s delighted to see her, says the Bit-ler’s looking well.  It transpired that Disinterested Mother didn’t recognise her daughter, and the next hospital visit produced a litany of improvements the Bit-ler should make about her hair, her clothing, and jaysus, didn’t the Bit-ler’s school chum drop by wearing a three piece suit and why wouldn’t he, since he works in the hospital?

The Bit-ler tells me all this on the phone, thinking it’s funny that said chum described her hairstyle as U2 Roadie and I’m all, What-er you on about, your hair’s gorgeous, and then she admits she’s spent her whole Dublin visit with her hair tied back.

I don’t understand.  All those mornings up at stupid o’clock so she wouldn’t look like Gargoyle Possum dragged backwards through a hedge.

It’s because she’s home, she says.  Her mother, her porcupine aunt, the neighbour’s chillen, her school chum, there’s no place like home to show you that the longer you know someone, the more you have to lose.

My Butler-in-Transition with her suede boots and turquoise jewellery and lemon shoulder bag, the look of pure joy on her face when she got her hair extensions, and she ties it all back so people’ll still love her.  My heart cracks a little and a small animal inside it, keens.
Posted by Lora Hughes at 11:14 No comments: 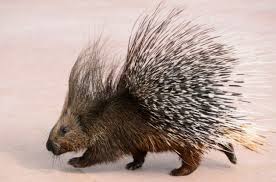 ‘What have I ever done to you, that you treat us this way?’

The first words out of her mouth when she got me on the phone.  The Bit-ler’s formidable aunt.  She’d never married, worked as a PA to someone powerful, the best a formidable woman could do at the time.  She cared for her parents, then her bachelor brother, living four score and seven years in the house where she was born, spreading her porcupine love.

The Bit-ler was the first and last grandchild in that Irish Catholic family.  Her mother fared badly during delivery, so baby went home in Formidable Aunt's prickly arms until the disinterested mother could manage on her own.  I always felt you weren’t mine, you’d been switched at hospital with some queer folks’ baby. 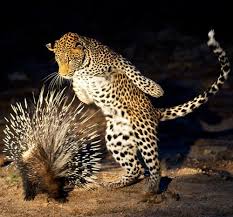 The sisters' great war has lasted nearly a century, the Bit-ler sometimes ground they fight over.  And now Formidable’d rung about Disinterested thwarting best laid plans, etc.  The Bit-ler herself, out garnering support for her transition, her work, Disinterested’s care plans, leaving me fair game to Formidable’s tongue.

‘What have I ever done to you, that you treat us this way?’

I hadn’t a clue, which was just as well because she didn’t want to start a fight with me.  Formidable vented her spleen about her Disinterested sister, then moved on to the Bit-ler, using male pronouns and names, asking why in the world I hadn’t left him, if it’d been her husband, sure to God she’d be long gone by now.

During the Bit-ler’s long ago childhood when DeValera and the clergy were still gods, Formidable knew what needed done, dragged an unenthusiastic Bit-ler to swimming lessons and scout meetings, altar boy practice and long, dull visits to relatives in the country while Disinterested Mother babysat someone else’s children.

I was spared witness of that, but not the bachelor brother’s 90th birthday, attended by the only grandchild, the elderly siblings themselves and a couple no one seemed to know (descendants of someone’s illegitimate child, it was whispered).  Formidable had planned a tight schedule that required a forced march through dinner.  At the end of the meal, the waiter offered Bachelor Brother coffee.  Formidable said there wasn’t time and the waiter lost his mind.  It isn’t up to you if he has coffee. 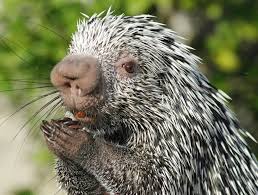 The manager was called, but by the time he got there, Bachelor Brother had talked Formidable out of making a complaint.  The couple nobody knew tried to make conversation while Disinterested Mother pretended to be senile and Bachelor Brother stared at his empty coffee cup.  Formidable across the circular table from me, silently waiting to pay the cheque, the expression on her face not anger, but shame.  I saw in that moment a lifetime of getting smacked in the face for being a porcupine, when a porcupine was what was needed.

I feel sorry for you, she says to me on the phone, sure I do, what with no family and I understand his principles, he thinks he’s a woman but couldn’t he put on a pair of slacks?  Lots of women do, you know.  And then she invites me to come over.  You like looking at old buildings, you could walk round Dublin and I wouldn’t tell a soul you were here.  I wouldn’t say a thing to anyone.  We could take in a couple of shows and I’d feed you a meal and then you could look at old buildings.  You’d like that, sure wouldn’t you?

And I realise here’s the first person to initiate support for what I'm experiencing.  There’s been coos and whispers of compassion, and poor El Punko has patiently listened, but here’s a concrete offer of befriending the invisible SOFFA in this maelstrom.  Not, Aren’t you brave?  Be sure to take care of yourself.   He . . . I mean she’s very lucky to have you.  An actual, Come here and let me take care of you.  From a porcupine.  God, it'd be hysterically funny if it weren't so terrible. 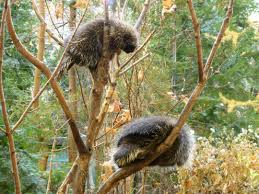 In my imagination, Formidable and I become porcupine buddies, like nuns who always go round in pairs.  We take in a show and I shop for Christmas, poke my head inside old churches and listen to trad sessions in pubs.  In reality, I’d most likely end up throwing myself into the Liffey, but knowing that, I still feel a kinship with this Formidable woman, all quills and thorns and knowing what’s best in situations where she has no experience.  I see myself at my worst in her, so why not go over and be my worst, cackle at conjoined proclamations on the lesser-thans, get rid of all this anger and distress and disappointment, this feckin invisibility of being the one who always copes, plans, rescues, cheers, supports, while weeding gardens, painting furniture, cleaning, washing, and writing writing writing stuff that’s longlisted and shortlisted and destined to be rejected.  It’d be comforting to bond with the wicked in a place where I could be wicked and say it’s not fair, then leave it behind, a psychological dirty weekend. 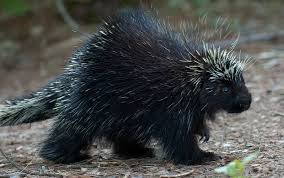 I may pack my best porcupine outfit and head off to Dublin.  But don’t tell a soul I’ve gone.
Posted by Lora Hughes at 06:33 1 comment: