The tag line under this site’s title reads, The first year of my partner’s gender transition.  This month, that year is up.  So a little reflection.

About a decade ago, my spouse (who’s now known as Siobhán) first admitted to me her gender dysphoria – being transsexual.  I turned to the folk who’d helped me with my son El Punko’s transition – Transfamily –  a web support group with chatrooms for different family member groups.

The spouse chatroom had ANGER.  Understandably so.  Most, like myself, hadn’t been told what they were getting into before they married.  Few, if any, had been through a transition before.  And let’s face it, our culture is SO focused on sex, sexual orientation, sex, sexual identity and did I say SEX, that while the supportive trans-parent becomes an archetype of parental love, the supportive trans-spouse gets tarred with the weirdo-pervert-just-plain-crazy brush.

As one of Siobhán’s friends said, Lora didn’t sign up to be a lesbian.  As if that’s all marriage is about.

I didn’t last long in the spouse chatroom.  The only bits of advice I remember were (1) Don’t let her EVER wear your clothes and (2) be prepared for her to turn into Uber Diva.

To be honest, Siobhán’s clothes are nicer than mine, so I steal hers.  And Uber Diva?  Puh-leeeeeze. The woman’s a huge softy, quietly in the background making sure everyone gets more than what they need.

At least pre-transition, she was.

Between the two of us, I don’t know who was more excited about Siobhán’s transition.  I certainly showed it more, although I did have a sense that neither of us could know how much this would challenge us.

And it was exciting, all the firsts.  First pre-transition talk at work, first hair, first posh do.  Four months into it, though, I started not feeling well You go without me, missing out on this and that until my life gradually became days of watching wildlife in the trees outside my bedroom window.

For years, they tell me,
an
insidious medical problem
quietly sneaked up on me
until . . .

right in the kisser.

Although I didn’t have the focus to write, my brain still worked like a writer’s brain, so I did what writers do – observe, observe, quietly and mutely observe.

As a result, I became a spectator rather than a supporter of Siobhán’s transition.

And I noticed a few things.

(1)  I'm extraneous to everyone in her life, friends and involved professionals alike.  As any non-professional SOFFA* will tell you, we’re excluded from the process for confidentiality reasons, but there’s also no supports for us in place.  The most important people in the trans-person’s life and no one takes care of us.  As if that doesn’t negatively affect the trans-person.  I’ve offered my professional skills on occasion to develop support groups for myself and others, only to be patted on the head and sent back to my hole where hopefully I’ll stay.

(2)  I suspect when a person waits this long for validation, it becomes addictive once she finally gets it  This means that advice given by casual strangers or the sudden interest from people who’ve not been overly compassionate with Siobhán in the past, carries more weight than the last 10 years of my consistent support.  It’s maybe this particular dynamic that prompted the warnings in the trans-spouse chatroom to watch out for Uber Diva.  There’s certainly been the rare sighting of her in my house during the last year.

Many, many people, both trans and SOFFA, refer to the beginning of transition as a second adolescent.  All of the above, even Uber Diva, is stuff Siobhán should’ve done as a teenager.  And although I’m not her mother, the spouse is often put into that pseudo-parental test-the-limits-in-a-safe-place position as the trans-person explores their representation of gender.

I understand this, but I'm tired from being powed in the kisser.

A year after starting her Real Life Test, Siobhán’s finally had her first appointment at the NHS gender clinic.  In case you're not familiar, the clinic's supposed to help in transition, not rubber stamp it once it's done.  I've been there, done that with El Punko’s struggle to get adequate medical care; the memory wears me out.

Siobhán’s friends come over and discuss hair, voice, hips, until my eyes roll back in my head.  All my adult life, I’ve dealt with this What A Woman Should Be shite. 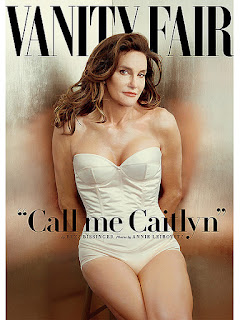 To hell with social norms.

Be a goddam trans woman,
not Cait feckin Jenner.

If I were healthy, this wouldn't be so in-my-face because I’d be up to my eyes in writing and gardening, painting furniture and chasing a Doodle over the moors.  With my own interests taking centre stage, I’d be supportive.  I’d play fair.

But you know what?  Fairness is a social construct with shifting goal posts.  A 16 year cancer patient taught me that.  She said there’s no reason for anything.

Get on with it.

Out the window, I see woodpeckers nesting in the back garden.  In my pantheistic mentality inherited from a Leni Lenape grandmother, Woodpecker is birth medicine; it beats the drum of honouring ones unique path, rejecting conformity.

Appropriate for a heretic.

If I were healthy, I’d be writing.  Or gardening.  Or painting furniture and chasing the Doodle across the moors, although not at the same time.  I’m not healthy but I am a realist.  Woodpecker says, even though I’m sick, get up from the trans table and find my own project away from the sound of other people’s drums. 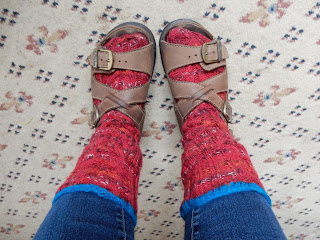 I’ll let you know
when I get there.