The Importance of Being Ruthless

A big thanks to The Propagator for hosting this weekly diary.  For links from gardeners all over the world, check out Mr P's comment section & the Twitter hashtag, #SixOnSaturday. 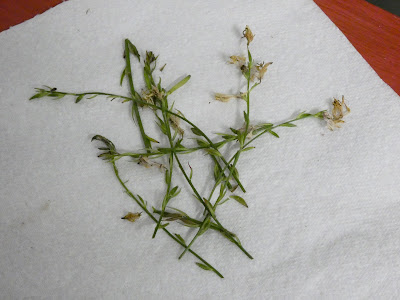 Several years ago, my then landlady discovered me rescuing holly seedlings from the rose garden.

She had no qualms admonishing me,

Lora, if you garden, you must be ruthless.

To this day, I've not learned the importance of being ruthless.

Polly has 2 leaves dying at the moment - the yellow in front & that bit of orange in the back. 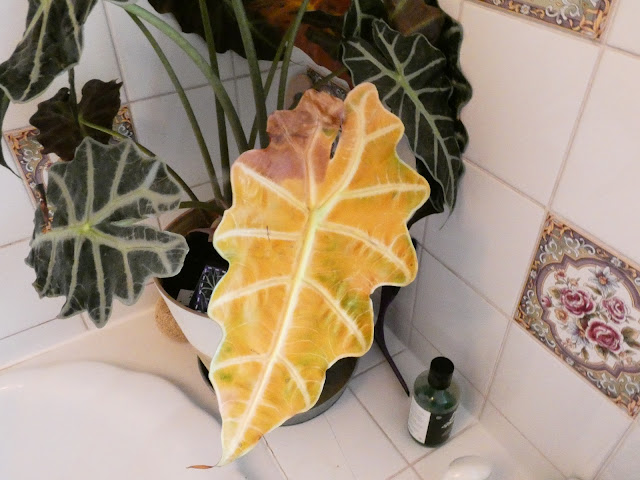 I find the contrast in colours so pleasing, I've not the heart to cut the leaves off yet.

These 2 little guys were featured here last autumn after being found in the pumpkin/corn patch.  I kept them, even though I don't particularly like mahonia & the one on the right looks awful.  It might even be dead. 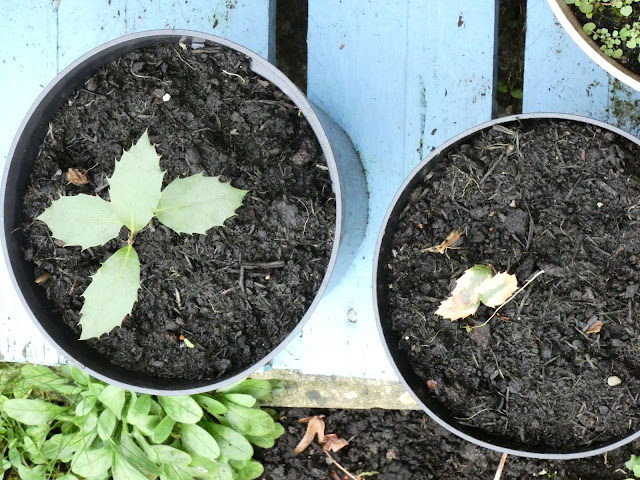 As I may've said then, I couldn't imagine where they came from, as none of my neighbours have mahonia.  Then this morning, I saw something familiar a mere 10 yards from our front door in a communal green space. 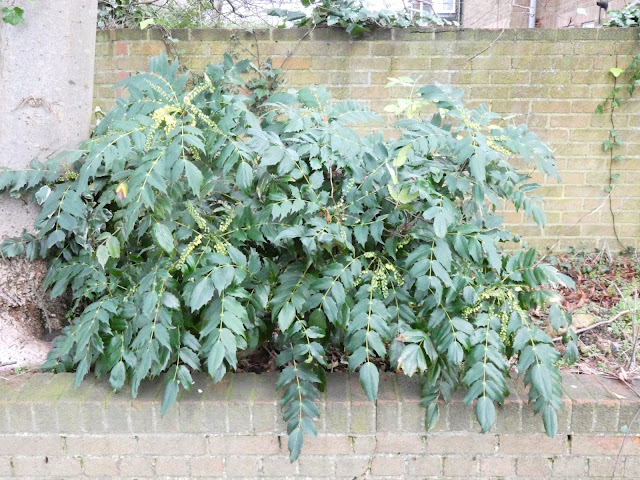 I think I've mentioned before that I'm not overly visual.

When planting bulbs in the front garden this past autumn, I topped up the beds with recycled compost, mostly from pots where the original occupants had died back.  The spinach seemed pretty close to death but when I dumped the pot, they clung to each other. 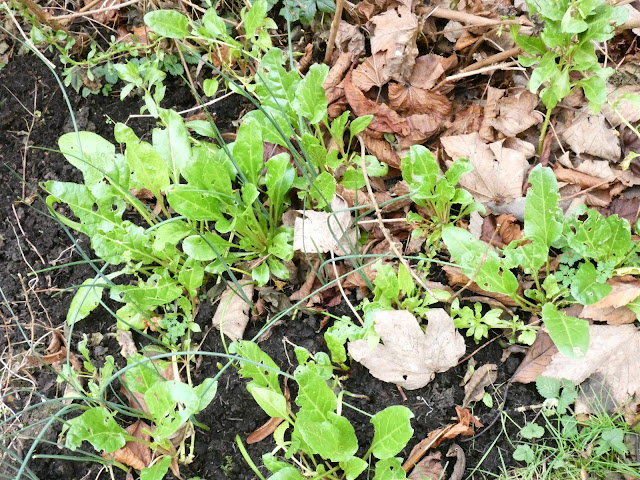 Thinking they'd soon die of frost, I uprighted them & patted them in.  Three winter months later, here they still are, the bulbs growing up between them.

Other folk've said it's difficult to keep a basil plant through winter.  To be sure, I've never had one retain full health.  This bedraggled specimen's been retired from cooking duty but stays on the windowsill.  During its morning rotation, it gives me a good whiff of itself. 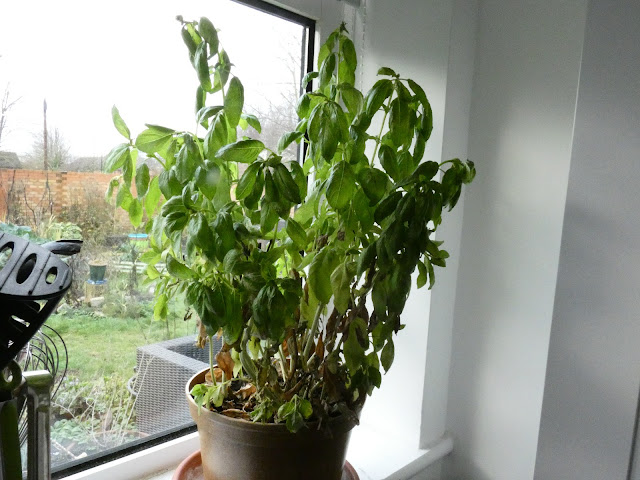 Latterly, there seems to be an undercurrent of cat urine to it, which certainly can't be attributed to our Mizzy BunnyButt.  I read in Bannerman's Scent Magic that a plant's odour changes as they age, going from sweet or savoury to faecal or rotting in order to attract a different type of pollinator, such as flies.  I suppose that's what's happening here.

Only last spring, I discovered a volunteer valerian had wrapped itself around the roots of my favourite Crooked Cherry, nearly killing the tree.  You'd think my heart would've hardened toward the valerian, but no.  I moved it from the pot to the border. 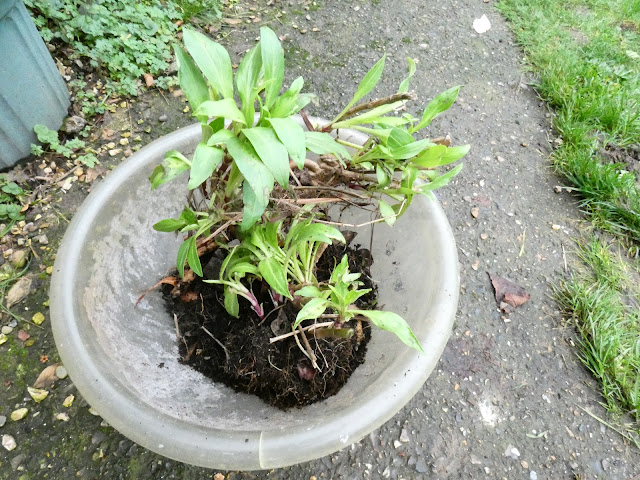 This summer, another valerian (pictured above) self seeded in my akebia pot.  A ruthless person would've plucked it at first sight, or missing that chance, dumped this mature plant into the compost.  I am not yet a ruthless gardener.  This week it got moved to the blackberry row, in hopes it'll do no harm there.

When we moved in last year, there was an apparently empty pot in one of the borders which got unceremoniously dumped into the new beds.  Grape hyacinth appeared in the spot, & was well received.  When it died back, it was forgotten, so not separated last autumn, as you can see. 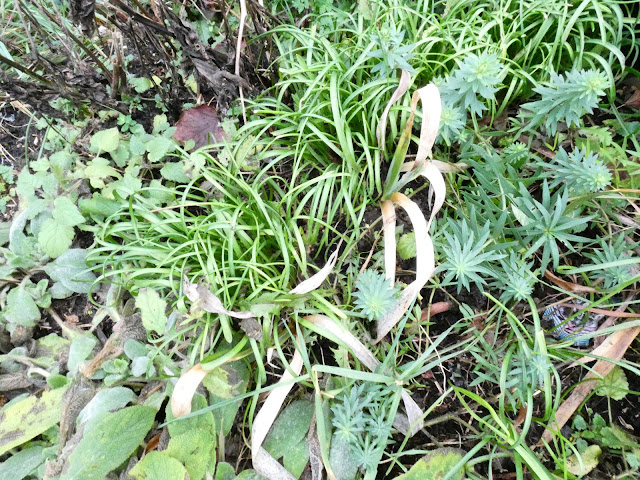 Its neighbours could use some ruthlessness.  To the left, honesty, which I loathe for its ugly foliage & flower, made worse by its propensity to take over any space.  To the right, purple toadflax, which I quite like, but which is equally invasive.

I'm thinking they might get transplanted into one of the many communal green spaces around here. 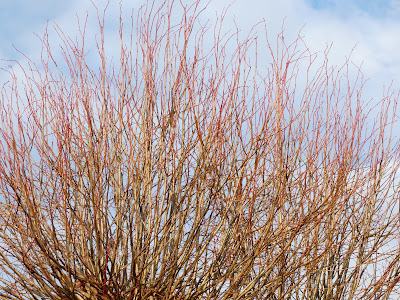 That's it for this week.  So glad you stopped by.  Hope to see you next time.
Posted by Lora Hughes at 01:14