A shout out to The Propagator who hosts Six On Saturday, a weekly gardening diary.  To snoop into gardens from all over the world, be sure to drop by the comment section of Mr. P's blog & check out the hashtag on Twitter. 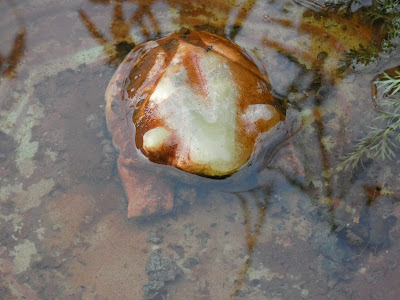 We've had the longed for rain this week.  While great for the plants, the weather kept me inside with easy access to happenings in both my original & adoptive countries.

This time of year, it's mostly running the straight stretch to winter, but there were some surprises.

So let's do this thang. 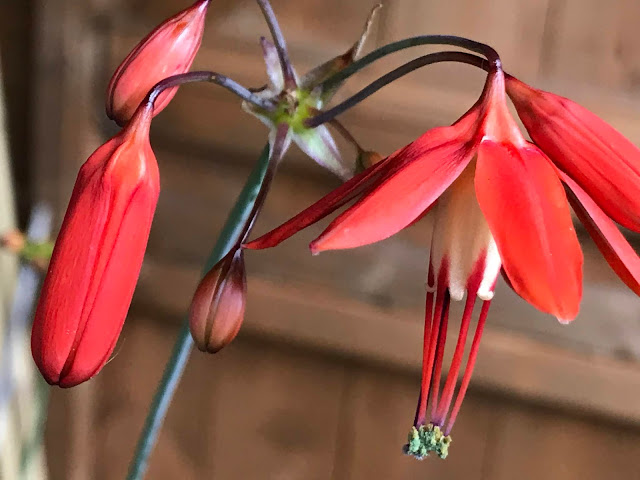 Drawing on long ago primary school science lessons, I'll hazard to say the white middle of these blooms produces 6 scarlet stamens w/grey-greeny dollops of pollen on them & a dark purple pistil in the middle - the latter being a bit more visible in the photo below. 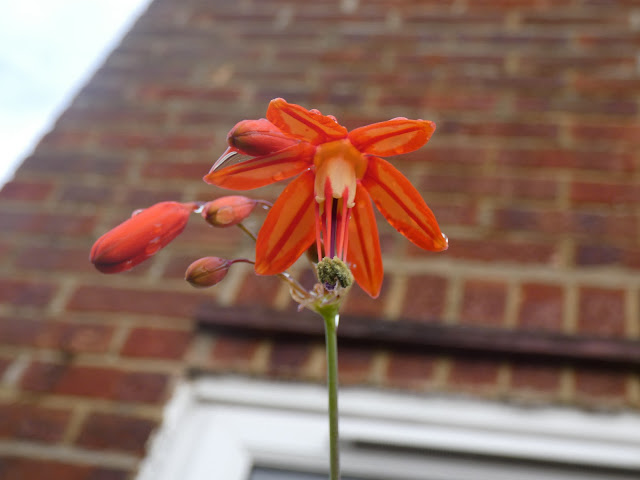 The blossoms are supposed to be long lived, so hopefully will all be open at same time. 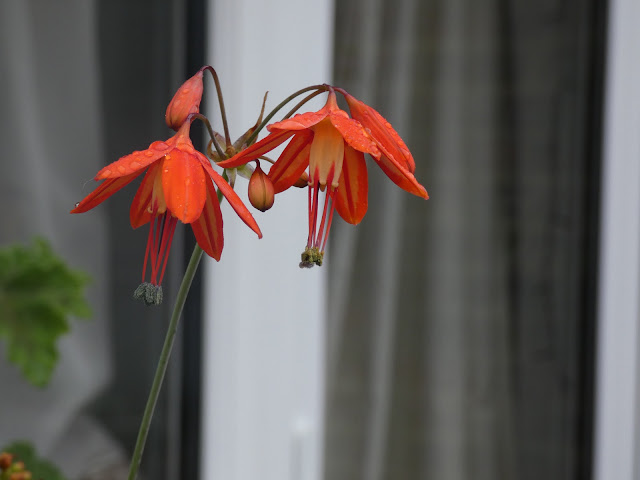 Last week, Hey Jude asked how I got mine to bud & I had to admit they were stuck in pots because I didn't have time to figure out where I wanted them to go.

I've since learned they're half hardy, so will stay in their pots & spend the winter in the shed.  Might have to get them something more exciting than coir pots for next year.

Last week, I filled the new hydropod with cuttings.  Within 2-3 days, a coupla rose cuttings had roots appear above the foam collars, even though there were what looked like growth nobs below the foam. 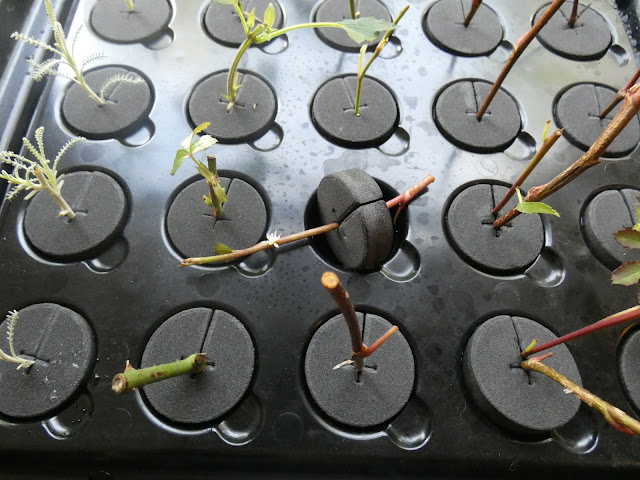 A consultation with Mr P elicited advice that I move the roots to below the collar, which I did, meaning only a little bit of cutting showed above the foam.  The roots on this particular cutting have grown since last week & about a third of the others have started their roots, so reserved happiness, at the moment.

As a side note, the hydropod is set up in our TV room.  The pump is quite noisy & the system acts as a sort of air conditioner, cooling the room.  Because it's filled with water, it's not convenient to move, so I'd advise against stationing yours in any of the main rooms - you'll have to live with it where it is for a while.

Every year, I worry about keeping pumpkins until Halloween.  A few weeks ago, I eavesdropped on a thread started by Nicky Kyle about curing pumpkins & squash.  That info probably saved my 2 smaller pumpkins that are now curing indoors (next to the flowering gaura). 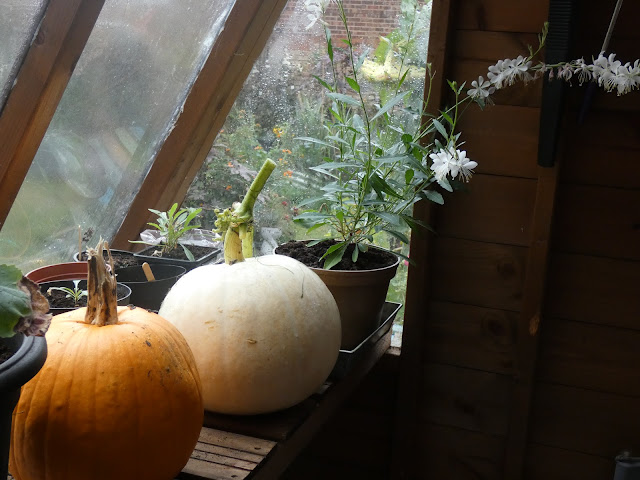 There're 3 more outside yet, one which is only wee & probably doesn't have time to grow enough before frost. 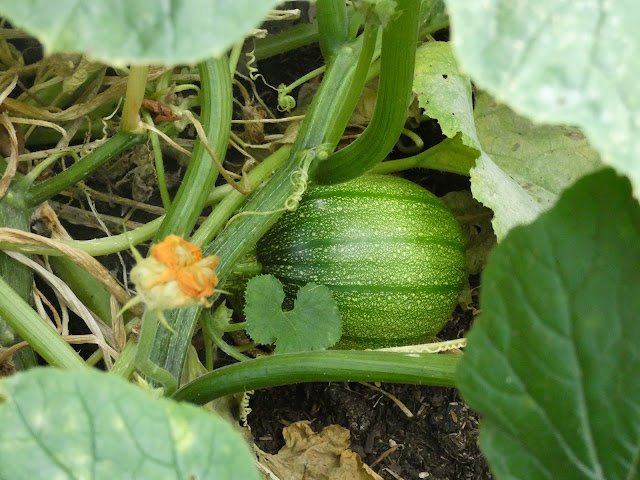 The vine is still healthy, so he's getting his chance to become a teeny green jack-o-lantern.

I've not featured my cyclamen before, though they've been belting it out in the not-so-shady bed for the last few weeks.  Up 'til now, there've only been flowers, but this week, leaves. 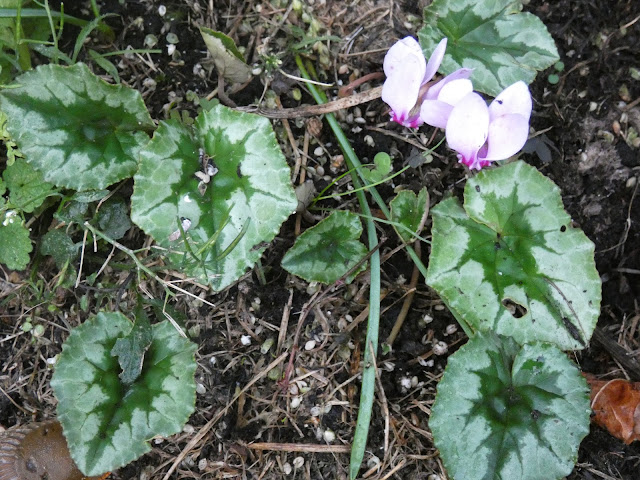 My first year for this particular type cyclamen (whose corms are enormous!) & they've absolutely delighted me.

My winter crop of Romanesque is escaping its netting. 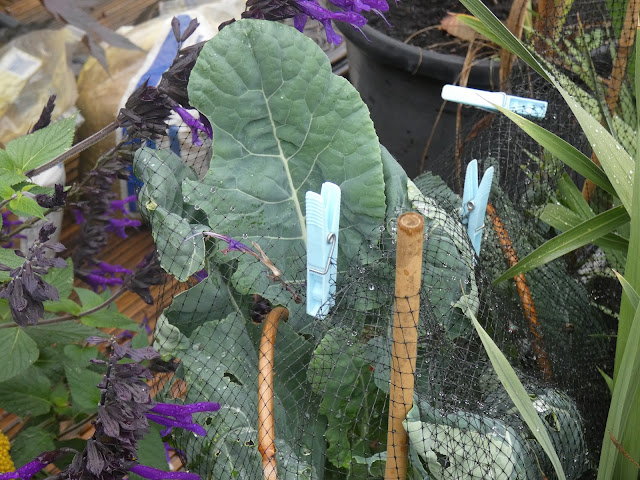 Earlier in the summer, I'd been quite smug, watching the cabbage whites beat against this netting.  Then I found their caterpillars climbing through the netting holes & wondered if cabbage whites lay eggs on neighbouring plants in hopes the caterpillar will find the brassicas.

While I haven't found any more caterpillars under the netting recently, this little guy is chancing his arm leaf.

First year for snow leopard melon & it grew guns ablazing, up the fence & trellis, across the much fatter pumpkin vines, into the tomato planters.   It produced tons of flowers that swelled up at the base, ready, willing & able.  None of them seemed to get pollinated & the little swellings fell off.  Maybe the tiny melon flowers couldn't compete against the huge pumpkin flowers for pollinators.

Once the pumpkin vines began to die back, though, I saw this greygreen thing hanging on the back trellis. 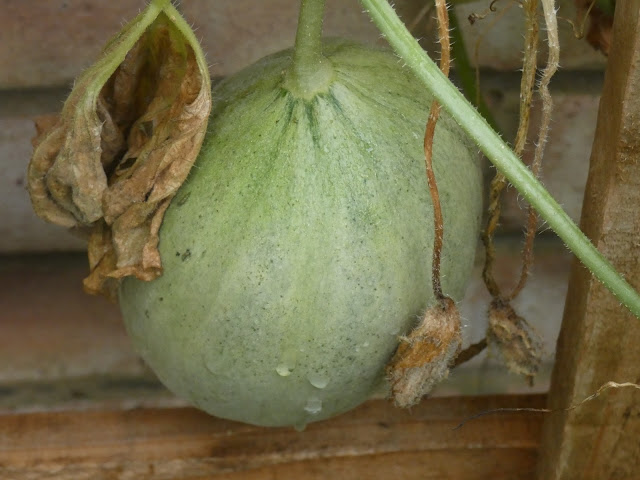 There's another melon on the ground at the foot of the trellis, but this particular one worried me, lest its weight compress the vine.

Break out the pumpkin hammock again. 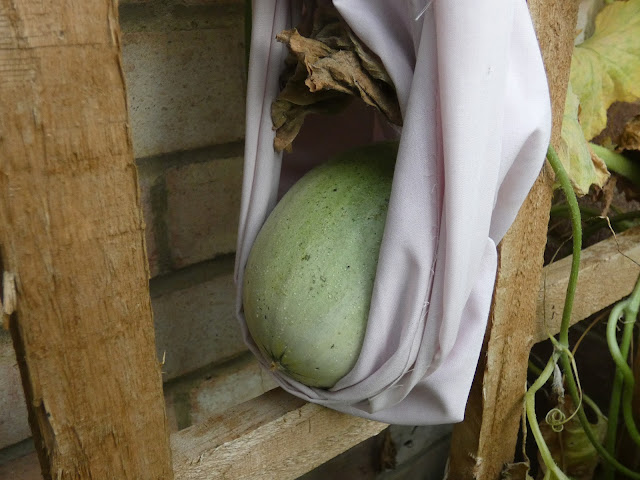 I have no idea if these 2 guys're gonna have time to get ripe, but their appearance is exciting!  I'll try them again next year, but in a planter where there's no competition from the big guys. 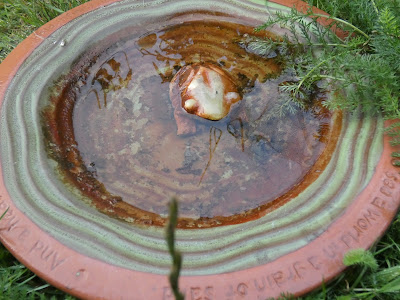 So there's my Six done for the week.

As always, thanks so much for stopping by.  Now I'm off to see what's been happening in your garden.