With plants transitioning from warm weather to cold,
the garden has tons of colour.

This week, I put on my spectacles to consider six plants
in various stages of the process.


1.  Let's start with something still in bloom.  Before we moved here, this unknown mint spent years self seeding all over the place.  I like the way it & the corydalis soften the brickwork areas of the garden.  Here, both grow in the shade near the leaky the water tap.


2.  The leaves of this spider fatsia are just starting to turn.  We got it earlier this year to fill a shady spot on the patio.  Although it didn't bloom, its foliage met all our expectations, as well as those of whatever has nibbled on it all summer. 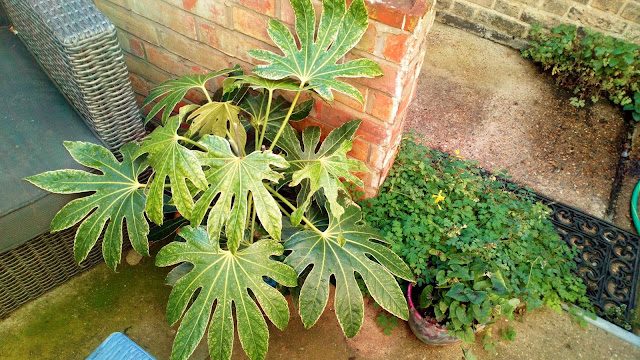 3.  The honeysuckle, also on the patio, is getting a really nice yellow.  This fella gave us trouble during the rainy season because, situated between these 2 chairs, it didn't have enough ventilation.  I raised it on some bricks, then spread a layer of mould barrier grit on top.  There were few blossoms, but I was ecstatic that it returned to health.

As you can see from the mushrooms (& the moss on the cement), damp will be an ongoing problem with this little guy, so next year, it'll probably be either relocated or elevated more.


4.  What's a garden without verbena bonariensis, eh?  It looks great on its own but plays well with short guys, tall guys, strong colours, pale colours . . . low maintenance and it lasts forever.  My kinda plant.


Amazingly, these two photos were both taken this week, & on the same day.

5.  Seedpods are to autumn as blooms are to . . . something.  Oh, summer.  A season that doesn't happen in the UK.  I don't know which crocosmia this is, as it's one of those guys I fell in love with in some long ago garden & have taken with me on my subsequent moves.  Here, it's thinking about laying down for winter on top of the purple sage - an old friend purloined from 2 houses previous to the crocosmia.

6.  I'll end with new growth.  This sea holly created quite the stir when it showed up at our house earlier this year.  A single stalk ending in one nearly done bloom, it looked like a piece of art rather than something that grew in nature.  It died back soon after planting, but not longer after, voila!

And here, with Mizzy BunnyButt for scale.


There's my Six on Saturday to last through the week.  Be sure to stop by The Propagator for his Six & links to many, many other wonderful half dozens.