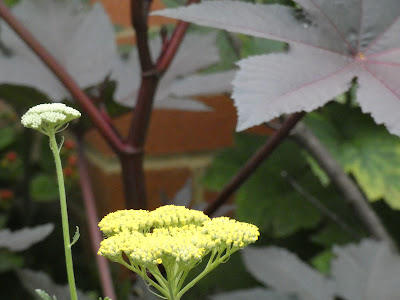 Welcome to my little slice of Six On Saturday, hosted by the inimical Mr P.

Today, we're expecting winds to reach 50 mph, during which I won't be in the garden.

I've been featuring my achillea lucky dip collection as they've bloomed - first the whites, Pearl & Snowball, then Cerise, whose name says it all.  This week's achillea is yellow. 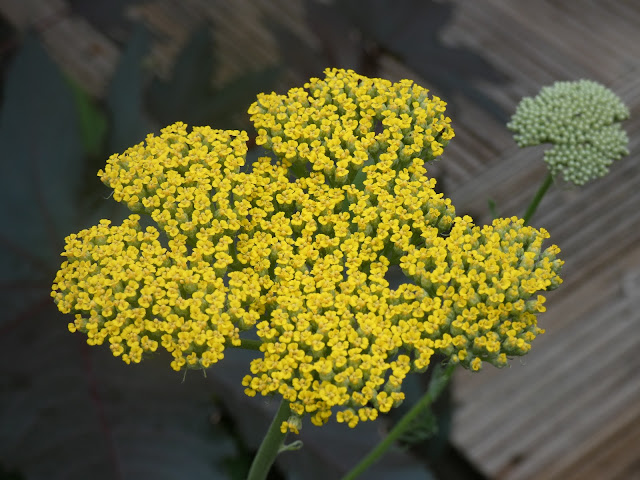 In addition to staggered blooming, they also vary in structure.  The whites lack the typical achillea foliage, stems lounging a good 24+" across the ground & other plants.  Both Cerise & my yellow (nameless) achillea have the familiar fernlike leaves seen in field yarrow, plus excellent posture.  Cerise is short & bushy, but the yellow achillea is 4 statuesque feet tall. 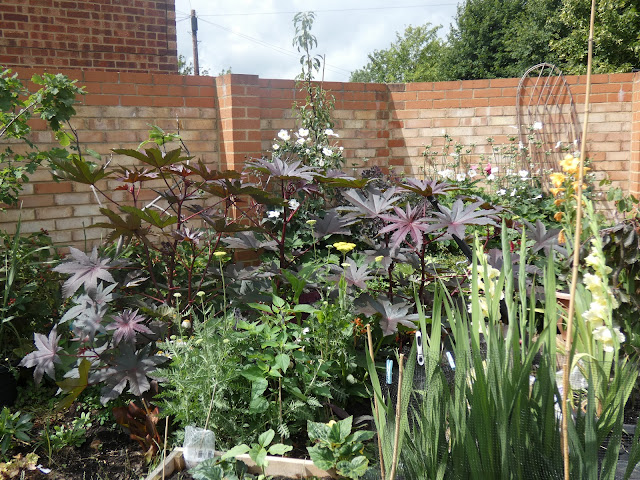 They weren't shipped with labels, so it's purely accidental that the yellow achillea got planted amongst the ricinus & cannas.  What the camera doesn't capture, is once you step back, the flowers look like floating glow orbs.

Another thing my camera doesn't properly show is how the light plays on the Russian sage. 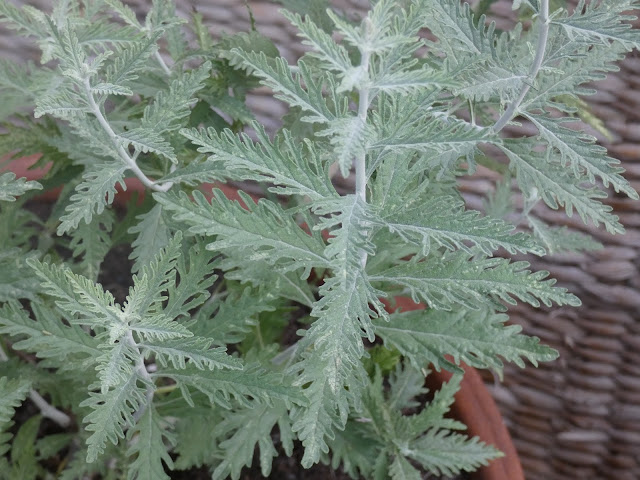 I got this for its scent but am spellbound by its changeable appearance.

A few months ago, I pawned off graciously gave some of last year's dried chilli crop to the mother of one of my son's friends.  She, in turn, sent back an entire crate of garden produce which was most welcomed except for the beetroot.  I, myself, love beetroot, but none of the cooks in my house do, so it got passed in turn to a neighbour who scorned repaid my kind gesture by giving me begonias he'd grown from seed.

These aren't the old lady begonias mentioned last week that I've come to love.  No, no, these are the ugly as dirt who in their right mind would grow these hideous things begonias.  This is the same neighbour who tried to give me his reeking voodoo lilies, by the way. 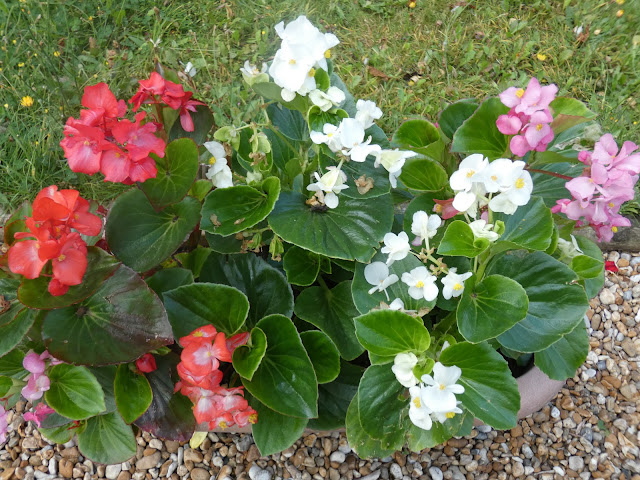 I planted them & watered them & checked them for slugs, who apparently found them too repulsive to eat.  They're still ugly as dirt but they look healthy enough.  And my neighbour enjoys seeing them when he walks by.

You  may remember that I'm growing white pumpkins for the first time this year. 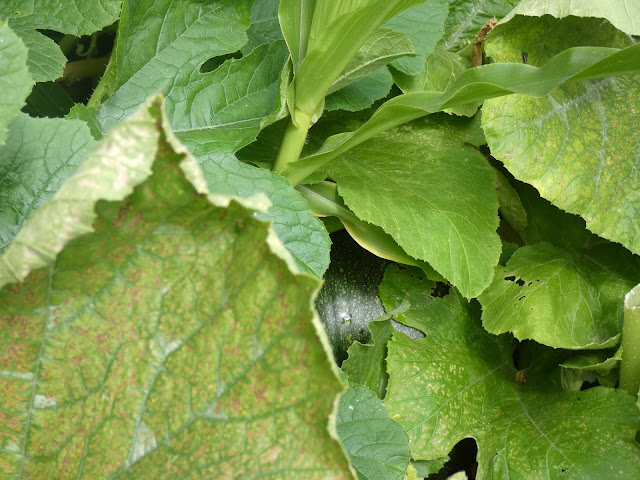 The Halloween traditionalists are pleased that I found a baby orange pumpkin in the patch.

Me, though, I was tickled to find this in the garden. 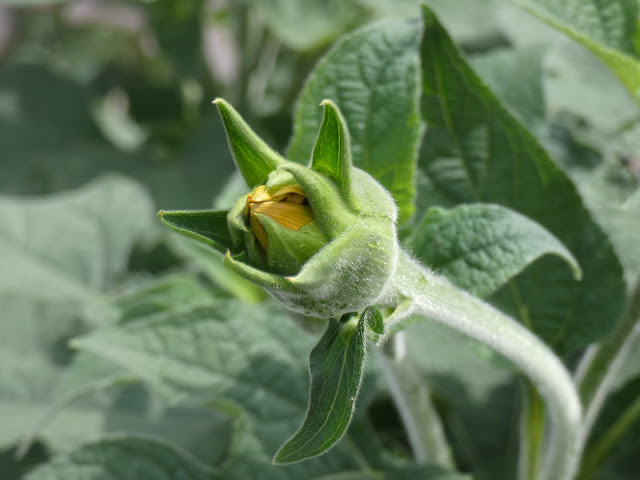 'Find' is perhaps misleading.  I've camped beside the plant, refusing food until the first sight of colour.  (Cake isn't food, right?)  It looks like a little cat face, its whiskers painted on.

It grows in a circular bed in the middle of the lawn, totally exposed.  Our last storm wasn't as severe as today's is supposed to be, & the tithonia weren't so tall.  Even so, they laid themselves down on the zinnias.  I made a sling out of old cloth to gentle encourage them upright.  Perhaps that'll keep them safe today.

This salvia started the summer as a plug plant, elbowing its place amongst the ricinus, cannas, daisies, thalictrum & perhaps some other stuff as well.  You can see it in the 3rd achillea photo, poking up between the two yellow glow orbs.  (Yes, you can have too many plants.)

In other SoS gardens, Amistad bloomed & left, so it incited great joy in me over the last several days to see this . . . 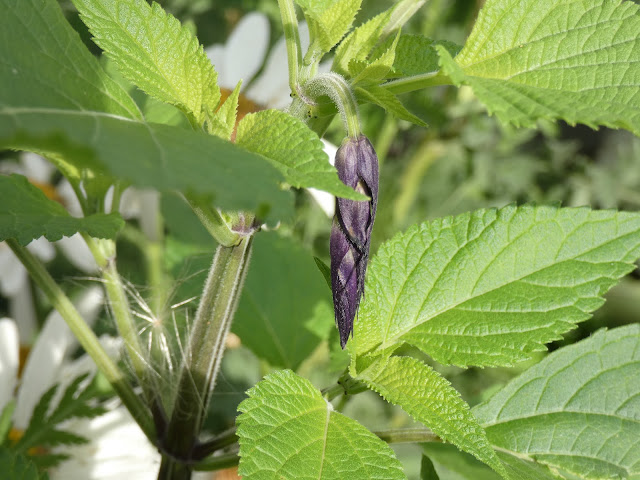 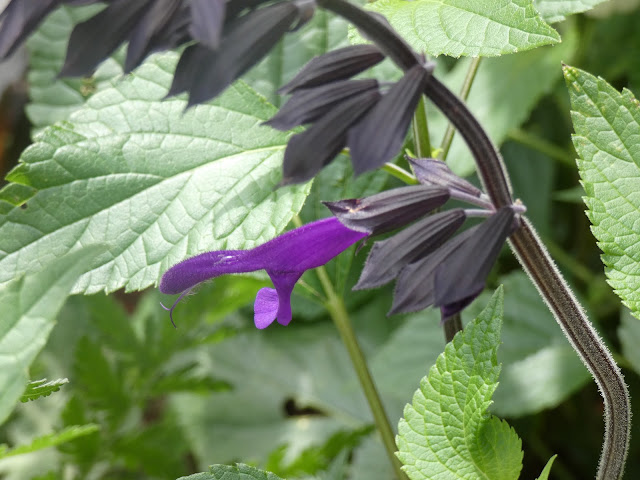 The colour combo plus the geometrics of the buds all leave me feeling very calm.  A short lived calm followed by a tickle in my belly because the bloom looks like a cartoon sea gull screaming at someone who stole its chips. 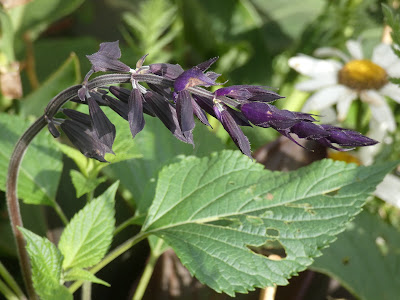 There's my Six for the week.  God willing & the creeks don't rise, the wind might leave something for me to report on next time.


Thanks for dropping by.  Hope to see you again real soon.